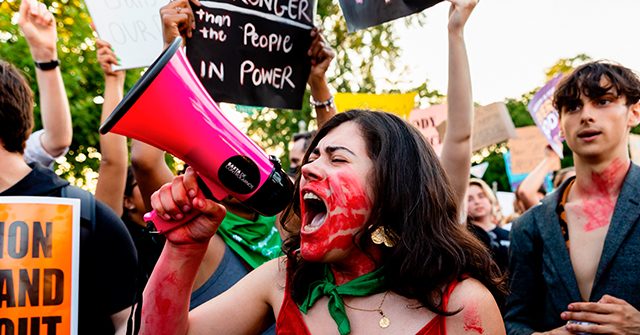 Wade after issuing its final decision on the Dobbs case, thus determining the right to abortion is not included in the Constitution.

Angered by the Supreme Court’s decision, the activists set fire to an American flag and a sign saying, “FUCK YOU MPD,” referring to the police department in Washington, DC: Metropolitan Police Department of the District of Columbia.As Breitbart News reported Friday, the Supreme Court overturned the 1973 court ruling in a massive victory for the pro-life movement:.An early draft of Alito’s opinion leaked in May, the first such leak of a full opinion in the 233-year history of the Supreme Court, leading the left to violent protests, including destroying a pro-life center in Wisconsin, vandalizing churches, and threatening protests at the home of conservatives justices in violation of federal law.

7 To many Black people, Serena Williams is us, and we are her | Opinion

11 This should be deeply concerning to every American citizen: Sean Hannity

13 US tech stocks back in favour, as Bank of America data shows a record $US3.3b flowing into the sector

14 What's in it for you? Five cash benefits in the Democrats' climate and health bill

16 FBI's Trump raid a 'bombshell' that will further divide the nation: Bret Baier

9 Poll: Florida 'Most Desirable' State to Live In

12 EXCLUSIVE: Sen Josh Hawley Calls for Europe to Scale Back Reliance on America

1 Why Americans are increasingly dubious about going to college

4 Crisis Core: Final Fantasy VII Reunion Is Apparently Much More Than A Remaster, But Not A "Complete Remake" - Nintendo Life