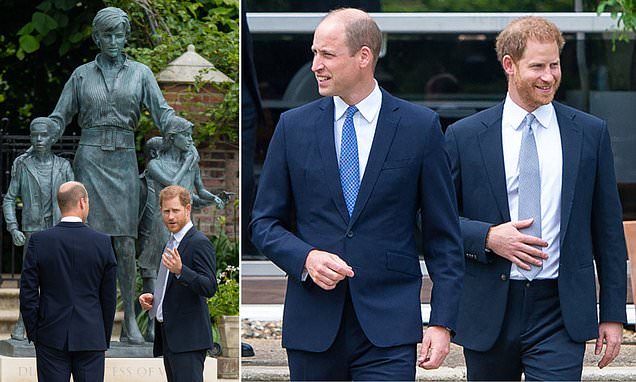 Oct 24, 2021 2 mins, 19 secs
Prince William name-check Prince Harry as he thanked friends at a private reception celebrating the unveiling of their late mother's statue, reports say.The 39-year-old heir is said to have spoken on behalf of himself and the Duke of Sussex, 37, at the event at Kensington Palace.Prince Harry jetted back to Britain from his home in Santa Barbara, California, for the statue reveal in July.But he missed the private reception at the west London palace - which was held to thank friends and donors.A source claims that a private reception held last week, Prince William thanked guests on their behalf as a pair, saying the brothers were 'both happy' with the statue.Prince William and Prince Harry during the unveiling of a statue they commissioned of their mother Diana, Princess of Wales in the Sunken Garden of Kensington Palace.The Duke of Cambridge was joined by his wife, Kate Middleton, 39, but Prince Harry missed it.The original reception was cancelled amid Covid-19 concerns and was rearranged for last week. Kensington Palace declined to comment.Senior aides at Buckingham Palace are scrambling to devise a strategy for managing the Queen's workload after being accused of misleading the public over her health.The Queen's courtiers faced extensive criticism last week for failing to inform the public that she had been admitted to King Edward VII's Hospital in London on Wednesday and stayed there overnight for tests. .The Queen at a reception for the Global Investment Summit in Windsor Castle, October 19, 2021.The Queen (right with Boris Johnson) at a reception for the Global Investment Summit in Windsor Castle, October 19, 2021.The Queen arriving to attend the ceremonial opening of the sixth Senedd, in Cardiff, Wales on October 14, 2021.Ms Seward urged Prince Charles to shoulder the responsibility of ensuring the Queen is not overworked, adding: 'They can divide the duties between other members of the family but Charles has to take a stand and say to his mother, 'Enough is enough.'.Meanwhile, the Palace press office is being urged to be more transparent should the Queen require further hospital treatment. .November 1: COP26 UN climate change conference, Glasgow, alongside Prince Charles and Prince William.June 2-5: Platinum Jubilee weekend, including a Buckingham Palace concert, service at St Paul's Cathedral, pageant and street parties

Traditionally she hosts three at Buckingham Palace and one at Holyroodhouse