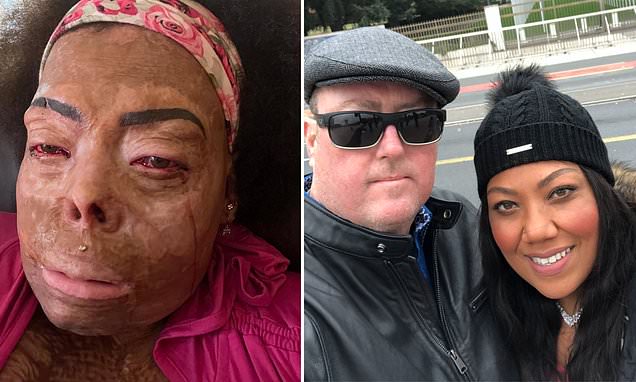 Oct 25, 2021 2 mins, 12 secs
A brave woman has revealed how she forgave her husband after he accidentally set her on fire in a horrific firepit accident that left her with agonizing burns all over her body - and seen her forced to undergo more than $2.9 million worth of reconstructive surgery.Influencer Tonya Meisenbach, 48, from Atlanta, Georgia, recalls how she 'went up like a match' after her husband Donald accidentally poured lighter fluid on her while trying to set a fire in the garden of their home back in December 2018.The mistake caused Tonya's arm, face, and hair to go up in flames - leaving her writhing in agony and with such severe burns that she had to be placed in a medically-induced coma for two months, in order to give her body time to heal.        .Tonya was taken to the hospital immediately and while she was in her coma, doctors performed a series of extensive reparative surgeries, including a full face skin graft.Agony: A 48-year-old woman was left with horrific burns all over her face and body after her husband accidentally set her on fire while trying to light a firepit in their backyard .Devastating: Tonya Meisenbach, from Atlanta, Georgia, was enjoying an outdoor dinner with her husband Donald when he accidentally sprayed her with lighter fluid.'I went up like a match': The accident left Tonya with such severe burns that she had to be placed in a medically-induced coma for two months while doctors rushed to save her life.In total, Tonya spent six months in hospital - but even when she was released, she would return regularly for various surgeries.Furious with himself for the accident, Tonya's husband Donald stayed by her side at all times, keeping a diary for her to read once she was taken out of the coma.The hospital provided $2.3 million for her surgeries but were unable to pay any more – and Tonya had no insurance.Recovery: While in her coma, Tonya underwent multiple operations, including a full face skin graft - and she has had to face many more operations in the months since she woke up .

Even my face is a full skin graft.