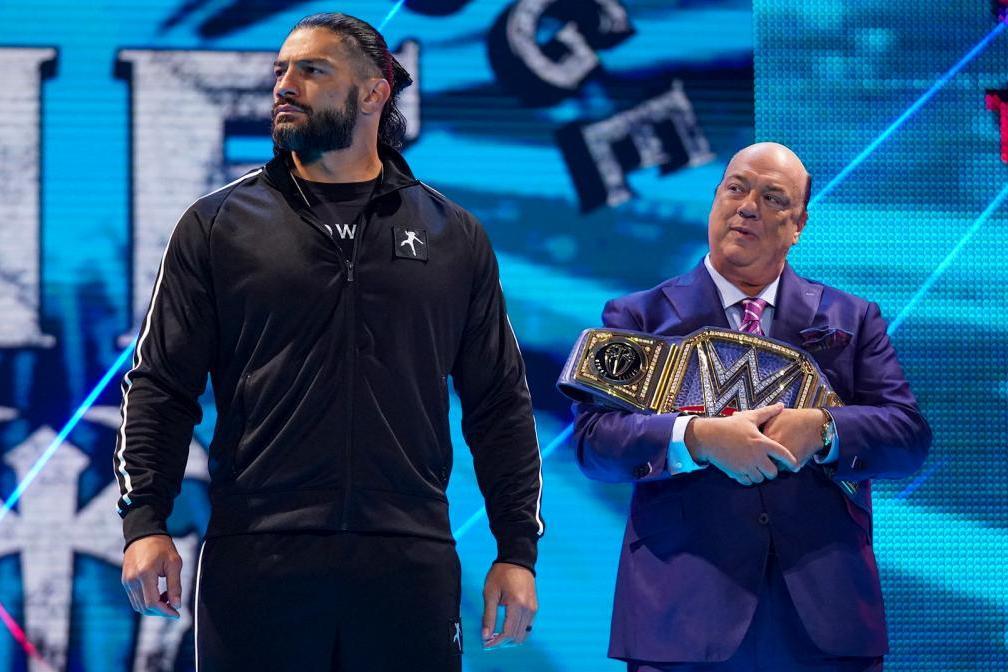 Jun 11, 2021 3 mins, 25 secs
Just one week after a vicious assault that left SmackDown tag team champions Rey and Dominik Mysterio lying, Universal champion Roman Reigns returned to the blue brand Friday night to address his actions and the status of his strained relationship with The Usos.The Tribal Chief headlined, as usual, on a show that also featured the return of the Ding Dong, Hello Show featuring Bayley and guest Seth Rollins, as well as Big E and Kevin Owens taking on Sami Zayn and Apollo Crews.Friday’s show started with a recap of last week’s events surrounding Roman Reigns, The Usos and The Mysterios, then transitioned into The Tribal Chief questioning whether Jimmy Uso knows the one thing he will not stand for: embarrassing the family. .Almost as if on cue, Jimmy hit the ring and cut a promo, calling Reigns jealous of The Usos and their desire to hold gold, too.

He accused Reigns of intentionally getting them disqualified last week and vowed that, by the end of the night, he would do something he would not regret.

You better do something about this,” Reigns warned Jey.

Reigns was excellent here, openly blaming Jey for his brother’s actions, despite the fact that it was The Tribal Chief who interjected himself into the main event of last week’s show.

Jimmy called him out on it, set the stage for some significant happening later tonight, and left Jey with a choice to make by the end of the night: continue to support Reigns or back his twin brother.

Four central figures in the Intercontinental Championship picture waged war in a tag team match Friday night as Big E and Kevin Owens battled Sami Zayn and champion Apollo Crews, who was accompanied by the massive Commander Azeez.The action broke down late, with Big E and Crews fighting to the floor, thus leaving Owens to drop Zayn with a stunner for the pinfall victory.

After the match, Crews challenged Big E and Owens to a tag team match on next week’s show, this time with Azeez as his partner.

You can gather by the performers in the match that it was a fun, energetic one that showcased all expertly before Owens continued to build momentum as Crews’ top contender with a pinfall victory over Zayn.While the idea of another tag team match next week may not be overly appealing to fans tired of the treadmill booking that has engulfed the SmackDown midcard, it will be worth it if Azeez has the opportunity to shine.Whether the creative team can resist spotlighting him at the expense of Owens, Big E, and Crews is the real question.Backstage, Reigns laughed off the idea of meeting Jimmy Uso in his locker room.

WWE’s production team set up the doorbell gimmick perfectly so that when it sounded midway through the segment, you knew something was up.

Chad Gable battled Montez Ford in what was originally slated to be a tag team match between Alpha Academy and The Street Profits.Fed up with being at the center of the family rivalry between Reigns and brother Jimmy, Jey Uso stormed out of his locker room

This led to Reigns berating Jimmy for not looking after his brother, for treating him so poorly

An emotional Mysterio acknowledged Reigns as “a rat bastard” who put his hands on his son, Dominik

He also acknowledged Reigns as the man he wants to fight...inside Hell in a Cell

The Tribal Chief sent Dominik over the top rope and to the floor before leaving Rey lying next to his son as the show came to an endThe real money, though, is in an eventual showdown between Reigns and the Usos

The amount of gaslighting going on between the Universal champion and Jimmy, in which Reigns blamed his cousin for the treatment of his brother when it has been the Tribal Chief manipulating the entire ordeal, was a phenomenal bit of storytelling