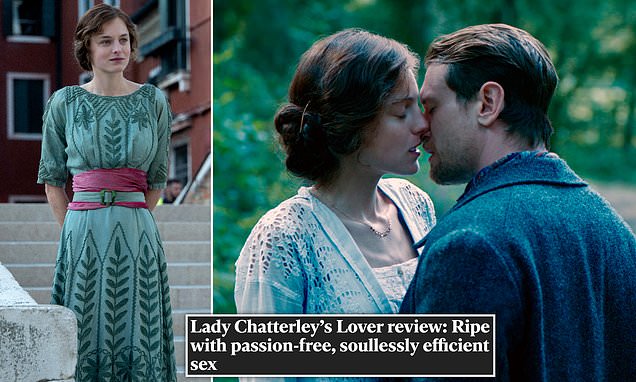 Lady Chatterley's Lover is one of the most anticipated films of the year, starring two of the UK's hottest thespians, Emma Corrin and Jack O'Connell.The pair play Lady Constance Chatterley and gamekeeper Oliver Mellors from the film adaptation of the 1920s DH Lawrence novel, famed for its raunchy content.The original novel was so steamy it was banned from publication in the UK, the US Canada and Australia for its 'obscene' content - meaning viewers of the film expected to be in store for steamy scenes in the onscreen adaptation directed by Laure de Clermont-Tonnerre.However after the Netflix production was released today, the reception has been somewhat lukewarm, with some critics panning the sex scenes as 'soulless' while others, including the Daily Mail's Brian Viner, believe the script has let the production down.The plot, which is centred around Corrin's Lady Constance Chatterley, follows the protagonist as she finds her sex life in tatters when her husband Sir Clifford returns from war injured and unable to have sex.The Daily Mail's Brian Viner said that, while Corrin and O'Connell were 'convincing' and 'splendid' in the Netflix adaptation of Lady Chatterley's Lover .The Daily Mail's Brian Viner acknowledged Corrin and O'Connell's performances as 'entirely convincing' and 'simply splendid' but criticised an overall 'tame adaptation' of the DH Lawrence novel.The Independent's Jessie Thompson argued Corrin (pictured as Lady Chatterley) gave a perhaps 'too modern' portrayal.The Independent's Jessie Thompson concluded that, despite the adaptation featuring 'an entire scene of full-frontal frolicking', the film still felt 'polite' and argued viewers were let down by 'soulless' depictions of sex.Taking issue with Emma Corrin's portrayal of Lady Chatterley as 'too modern', she likened the film to a Pinterest Board. .The Daily Beast's Fletcher Peters praised the film's production to such a degree she said she may watch it '40 times over'.She praised the steamy sex scenes in the film for their focus on Connie's sexual pleasure.She added the film did not push aside the plot to give way to the steamy sex scenes, and was well written, directed and acted.Although Wendy Ide said Emma Corrin and Jack O'Connell produced enough of a spark to power the national grid, she agreed the sex scenes themselves did not live up to expectations.Wendy Ide praised Jack O'Connell and Emma Corrin for their performances and undeniable chemistry in the DH Lawrence adaptationHowever, despite a lack of steaminess from the sex scenes, Wendy praised the production as 'impressive' - praising Emma Corrin as having a 'feverish wildness' to their performance.

Lawrence's steamy tale of sex, class and betrayal, Lady Chatterley's Lover, gets yet another reworking, this time with Jack O'Connell in the title role as low-born Mellors, and Emma Corrin as Connie, the titled young woman on the other end of their shocking, mutual infatuation

Lawrence's steamy tale of sex, class and betrayal, Lady Chatterley's Lover, gets yet another reworking, this time with Jack O'Connell (right) in the title role as low-born Mellors, and Emma Corrin as Connie (left), the titled young woman on the other end of their shocking, mutual infatuation

5 Asteroids made of "rubble" might be very, very hard to destroy, astronomers say - Salon