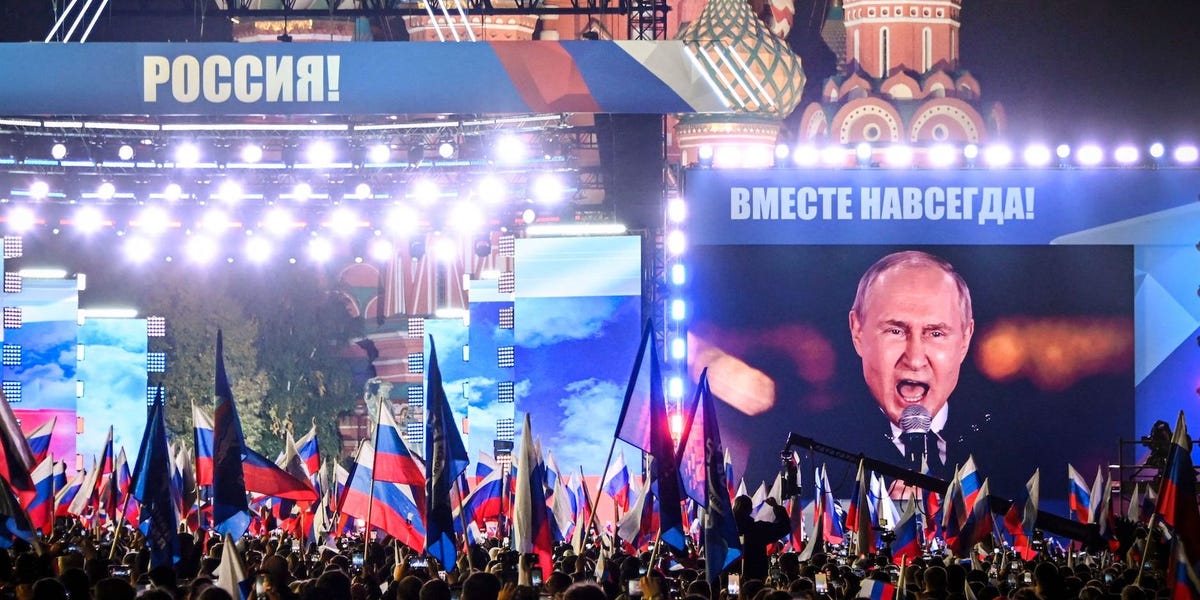 In a speech on Friday, an increasingly unhinged Vladimir Putin, facing battlefield setbacks abroad and growing dissent at home, railed against what he portrayed as a hypocritical and gender-mad West — his address included a transphobic rant about sex-change operations and "outright Satanism" — as he announced the formal annexation of occupied eastern Ukraine, territory he said that Russia would defend with "all the means at our disposal.".Dmitry Medvedev, deputy chairman of Russia's security council and always eager to demonstrate his loyalty to Putin and his "special military operation," echoed the remarks days later, saying that Russia could use nuclear weapons in Ukraine — "without asking anyone's permission, without long consolations" — if it felt "the very existence of our state," now expanded to include the Donbas region, were threatened.

I think the key here is that obviously he's trying to create a new condition, in Russian declaratory nuclear policy, where just someone upsetting the integrity of Russian territory somehow, potentially, is a recipient of a nuclear attack.

As you said, his rhetoric goes beyond Russian doctrine, which is, as I understand it, not so dissimilar to US doctrine: if there's an existential threat to the state, they might resort to nuclear weapons.

Frankly, I think the Russian military is probably a little less excited about throwing nuclear weapons around because they know full well what the consequences of doing that will be.

But there are a number of steps they would have to take before they could use a tactical nuclear weapon in the Ukraine conflict.

And he said that, if he were a Western policymaker wondering if Putin would really use nuclear weapons, "I'd be very concerned.".

That Ukraine doesn't matter, it's a failing state, if we use a tactical nuclear weapon, they're not going to risk the existence of London, Brussels, New York City over poor little Ukraine.

Well, Medvedev might be right about that — that the West would not want to use nuclear weapons even if Putin used a nuclear weapon in Ukraine.

The point is, the use of a nuclear weapon by Russia and Ukraine is not an attack on NATO?

Can NATO — can the United States — decide suddenly to attack Russia with nuclear weapons if they have not been attacked first.

Of course, the danger is that suppose Russia really thinks that it can just pop a nuke there — or several — and the West really is sort of armstrung; it can't really act, certainly not at the nuclear level?

One wildcard scenario you can imagine, of course, is that if he did do it that NATO would then — or the United States, more likely — would conduct strikes against Russian forces inside Ukraine.

Well, tactical, or non-strategic — these are terms from the Cold War, where tactical to a large extent referred to battlefield weapons, where they were developed for wars involving nuclear weapons in a small region.

Today, tactical nuclear weapons are essentially anything that's not covered by the strategic arms control treaties?

When people talk about nuclear weapons, and the treaties that you're talking about that govern them, we tend to think about something that would trigger an existential war — the destruction of Earth as we know it — whereas these are to gain, to be obvious, a tactical advantage on the battlefield by hitting, say, a bunker that's deep underground.

It used to have more tactical nuclear weapons when it had a lot of them deployed in Europe and in South Korea, but most of those were retired and pulled out after the Cold War.

What would be the thinking behind using a tactical nuclear weapon in Ukraine.

Is it kind of a situation where the worse Russia is doing on the battlefield increases the likelihood that they would use a nuclear weapon to say, "Look, just back off, NATO, stop arming this force that we're considering a proxy army against Russia".

What would be the strategic thinking — getting into the Russian mindset — of potentially using a tactical nuclear weapon in Ukraine.

Before the Gulf War in 1991, the Pentagon did a study on whether the use of tactical nuclear weapons against Saddam Hussein's forces there in the desert was an option.

But they discovered that they would have to use a large number of tactical nuclear weapons to have a real impact — a real effect — on those forces.

I think the big problem is with people both inside the Russian system, but also in the public in general, if they think about tactical nuclear weapons as something small; something less severe or something almost okay.

There's been a lot of talk of concern among US officials that Russia could potentially use nuclear weapons, and the US has been at least talking about stepping up its surveillance of Russian forces.

What are the US and its allies looking for that would signal a potential use of a tactical nuclear weapon.

So for example, before you can even fire a tactical nuclear weapons system, you have to bring the warhead for it out of central storage.

5 NASA vs. China: Photos reveal the state of their race to the moon - Business Insider

7 A 1930s eugenics experiment set the course for women's sizing

8 Elon wants to go to war with Apple. History suggests it's probably not going to make a difference. - Yahoo Finance

9 Musk goes to war Apple, claims it's bullying Twitter in the App Store

6 How loud is the world’s most powerful rocket? - Deseret News