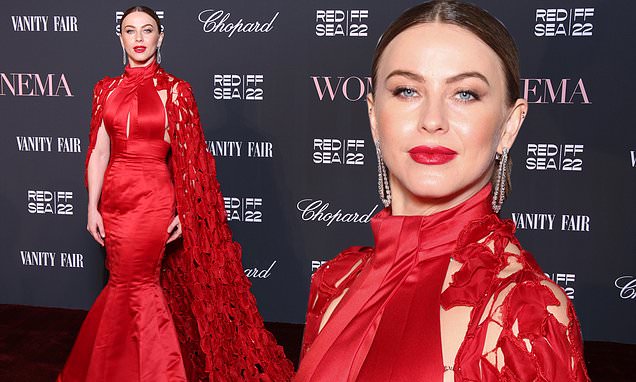 The professional dancer, who also made a glamorous appearance on Thursday for opening night of the festival, was accompanied by other talented stars during the ceremony.

Julianne Hough, 34, opted for a vibrant red gown as she attended the Women in Cinema event during the Red Sea Film Festival on Friday

The former Dancing With The Stars pro slipped into a mermaid-style, vibrant red dress with a lacy cape that flowed into a train behind her. The talented star kept her makeup classic, and opted for a layer of black mascara, shimmering shadow, and a touch of contour to accentuate her cheekbones. Julianne was also in attendance at the Red Sea Film Festival on Thursday to celebrate opening night of the ten-day event. The Red Sea International Film Festival kicked off on Thursday, and lasts over the course of ten days to showcase a total of 131 films and shorts. Previous attendance: On Thursday, Julianne attended day one of the Red Sea Film Festival donning a black dress with a flowy, sheer overlay

5 Could a fungal pandemic turn us all into zombies? - BBC

10 A deep dive: Weird and wonderful new creatures and features of the deep sea - Hindustan Times