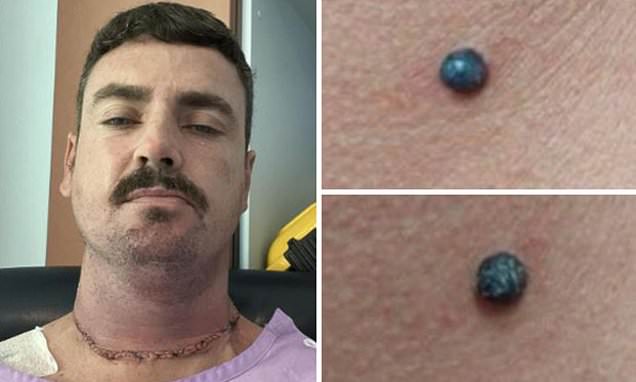 By the time Nicholas Smithson's hairdresser noticed a dodgy looking mole on his neck it was too late - now the 38-year-old has just six months to live.Doctors dismissed Nicholas when he asked about the mole - despite it doubling in size in just 11 days - so he went to a skin specialist.In fact the tradie told The Courier Mail he went to two doctors in 11 days after noticing the growth had doubled in size - only to be dismissed.Results showed the growth was a nodular melanoma and that it had spread beyond the blackened mole to his lymph nodes.After his lymph nodes were removed Nicholas found another lump behind his ear - he revealed that's when he realised how serious things were about to become.He was raced to Brisbane where he had a bilateral neck dissection - a 10-hour operation to remove the lymph nodes in his neckEleven days later he noticed another growth behind his ear'It's like in the movies when people are given bad news, they just disconnect,' he said

9 People Are 'Fed Up' With Prince Harry and Meghan Markle, Royal Expert Says 'We've All Had Enough' - Showbiz Cheat Sheet

16 Young & Restless: Danger is Coming for Diane and Ashley — Plus, Trouble Ahead for Sally - Soaps.com