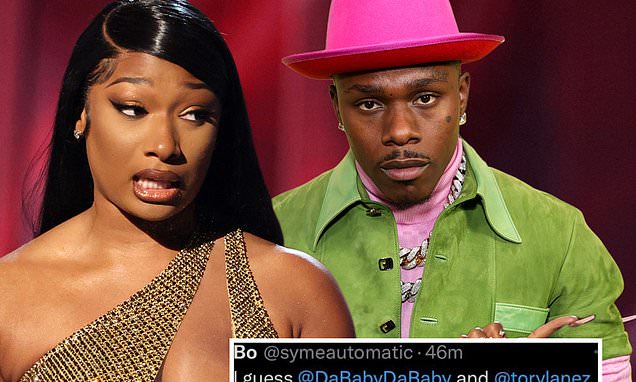 Jun 20, 2021 2 mins, 26 secs
Megan Thee Stallion slammed rapper DaBaby on Twitter Saturday evening after he re-tweeted a post that joked about Tory Lanez shooting her, which prompted a back and forth.The Cry Baby collaborators feuded on social media after Megan, 26, saw he had re-posted a fan comment that made light of the July incident — to which Tory pled 'not guilty.'.The fan's comment seemed to be prompted by DaBaby and Lanez' recent collaboration on a song called SKAT, which seemingly prompted Megan to unfollow him on Instagram the day of its release.Twitter war: Megan Thee Stallion, 26, slams rapper DaBaby after he retweeted a post mocking Tory Lanez shooting her on Saturday evening which prompted a back and forth .Retweet: 'I guess @DaBabyDaBaby and @torylanez cool now bc they shot somebody and don't have to do no jail time,' a fan tweeted which DaBaby reposted?The tweet referenced Megan's July shooting — to which Tory pled not guilty to felony assault charges and posted $190K bond — and DaBaby's January incident where he was said to have punched a club promoter in the face.Speaking out: Megan said that DaBaby was down playing the shooting and lambasted him for supporting her in 'private' but not 'publicly' after the tweet .

We already spoke abt this in private and you specifically said 'that ain't even no good business move why would I promote that s**t,' but now this ain't your 'beef'.