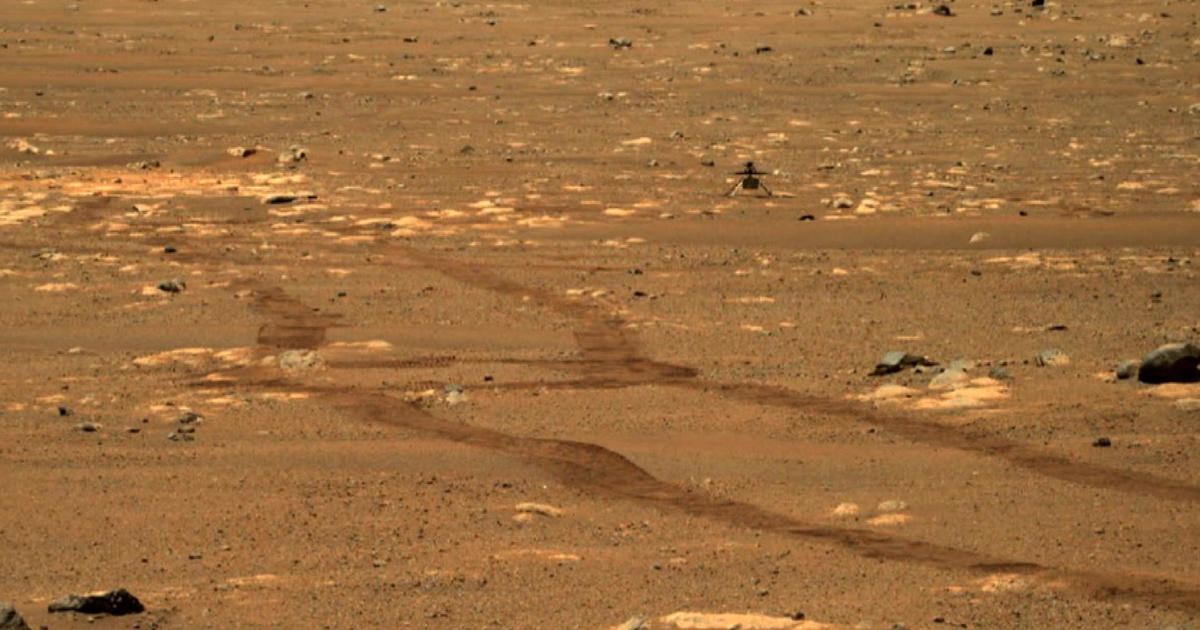 May 09, 2021 3 mins, 9 secs
Anderson Cooper reports on the nerve-wracking Mars landing of the rover Perseverance, the painstaking process of launching the tiny helicopter Ingenuity, and the extraordinary images the two have already sent back to Earth.We first told you about the tiny helicopter Ingenuity and the one-ton rover Perseverance nearly a year ago before they left Earth, but they've come a very long way since then.Last month in this desolate Martian crater, 170 million miles from Earth, Perseverance posed for a selfie with Ingenuity, the little helicopter it had just dropped off.Anderson Cooper: How hard is it to fly a helicopter on Mars.Anderson Cooper: A lot of people thought it-- it could not be done.

I mean, you need atmosphere for the blades to push atmosphere to get lift.

Anderson Cooper: The atmosphere on Mars is completely different .

I mean, the room we're in, right, it's-- compared to that, it was 1% of the atmospheric density over there.

On Mars, in the thin atmosphere, they'd have to spin six times faster to generate the same lift.

Even someone as good at flying drones -- and hummingbirds -- as Matt Keennon couldn't fly a helicopter on Mars.

Here's what happened in 2014 in a test chamber that replicated the atmosphere on Mars when Keennon tried to use a joystick to fly an early version of Ingenuity.

Radio signals would take about 11 minutes to travel from Earth to Mars.

Al Chen: -- nine years of work, seven minutes of terror.Al Chen: That's right?Al Chen: Yeah, we're still going about 350 miles an hour, and still slowing down.Anderson Cooper: So it looks gentle here, but in fact you're-- the-- it's falling at more than 300 miles an hour.Al Chen: That's right?Anderson Cooper: So you get a reading saying the jets that are going to help it slow down and control the landing, that they're not working.Al Chen: The stopping power.Al Chen: There's nothing you can do, right.Al Chen: Yeah, exactly, I'm right back there again.Al Chen: And there goes the descent stage.Al Chen: At that point, big sigh of relief-- you know.Ever since Perseverance landed on the red planet, a team of engineers, programmers, and scientists here on Earth have been living on Mars time.

While Perseverance sleeps to conserve energy during the freezing Martian nights, the team on Earth analyzes the photographs and instrument readings it's sent back?

Matt Wallace: And so it's just after midnight on Mars.Project manager Matt Wallace explained that a day on Mars is 40 minutes longer than on Earth?Anderson Cooper: So people here are-- are Mars night shift workers. .Anderson Cooper: But, I mean, working night shift is tough enough.Ken Farley: The oldest evidence of life on Earth is about three and a half billion years old.Anderson Cooper: And if it's determined, however long in the future, that, "No, there was not ever life," what does that mean?Ken Farley: The place where Perseverance landed, here in Jezero Crater-- is the most habitable time period of Mars and the most habitable environment that we know about.  This is-- this is as good as it gets, at least with our current understanding of what Mars has to offer.  And if we don't find life here, it does make us worry that perhaps it doesn't exist anywhere. .

Since it's carrying the first working audio microphones on the red planet, we leave you with what it sounds like as the one-ton rover slowly moves across the vast, lonely expanses of Mars