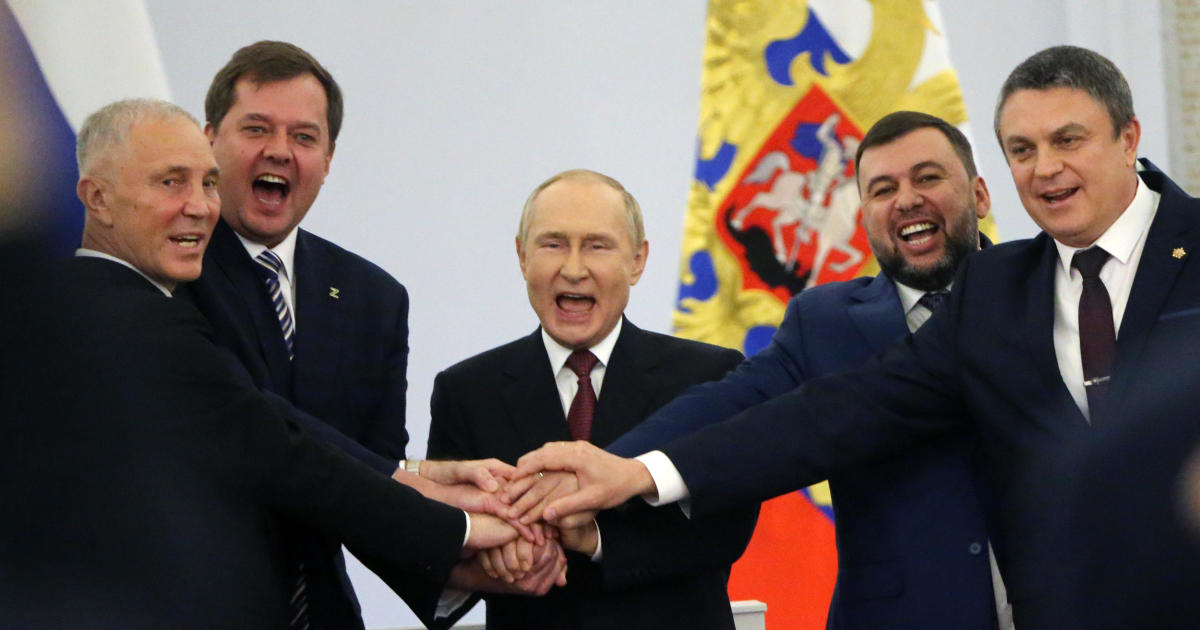 Russian President Vladimir Putin signed treaties Friday to annex occupied Ukrainian territory, a move the West has blasted as an illegal land-grab.Putin's move and President Volodymyr Zelenskyy's signing of what he said is an "accelerated" NATO membership application sent the two leaders speeding faster on a collision course that is cranking up fears of a full-blown conflict between Russia and the West.Putin vowed to protect newly annexed regions of Ukraine by "all available means," a renewed threat he made at a Kremlin signing ceremony where he also railed furiously against the West, accusing the United States and its allies of seeking Russia's destruction.Zelenskyy then held his own signing ceremony in Kyiv, releasing video of him putting pen to papers he said were a formal NATO membership request.In his speech, Putin urged Ukraine to sit down for peace talks but insisted he won't discuss handing back occupied regions."We are ready for a dialogue with Russia, but … with another president of Russia," the Ukrainian leader said.

President Joe Biden said of Putin's annexation of the Donetsk, Luhansk, Kherson and Zaporizhzhia regions: "Make no mistake: These actions have no legitimacy.".

The call for Russian forces to withdraw from Ukrainian territory – including the four regions that Russia is now calling its own – will now move to the 193-nation General Assembly. .The war is at "a pivotal moment," he said, and Putin's decision to annex more territory – Russia now claims sovereignty over 15% of Ukraine – marks "the most serious escalation since the start of the war." Stoltenberg was noncommittal on Zelenskyy's fast-track NATO application, saying alliance leaders "support Ukraine's right to choose its own path, to decide what kind of security arrangements it wants to be part of."."The entire territory of our country will be liberated from this enemy," he said.The Kremlin ceremony came three days after the completion in the occupied regions of Moscow-orchestrated "referendums" on joining Russia that Kyiv and the West dismissed as a blatant land grab held at gunpoint and based on lies.As the ceremony concluded, the Moscow-installed leaders of the occupied regions gathered around Putin, linked hands and chanted "Russia.

He said the West acted "as a parasite" and used its financial and technological strength "to rob the entire world.".

He portrayed Russia as pursuing a historical mission to reclaim its post-Soviet great power status and counter Western domination he said is collapsing."History has called us to a battlefield to fight for our people, for the grand historic Russia, for future generations," he said.In the Zaporizhzhia attack, anti-aircraft missiles that Russia has repurposed as ground-attack weapons rained down on people waiting in cars to cross into Russian-occupied territory so they could bring family members back across front lines, said Kyrylo Tymoshenko, deputy head of Ukraine's presidential office

2 Hybrid solar eclipse: What is it and how does it occur? - Space.com

7 The Tarot Horoscope For Each Zodiac Sign On November 23, 2022 - YourTango

11 'You handled that thing for 4 years': Woman says boyfriend asked her to Venmo him $7 for cold medicine he bought her - msnNOW

15 Exclusive — From a Democrat to a Conservative Vice President: Mike Pence Details Journey in American Politics

16 Independent Spirit Awards Film Nominations: ‘Everything Everywhere All at Once’ Leads With Eight Nods - Hollywood Reporter