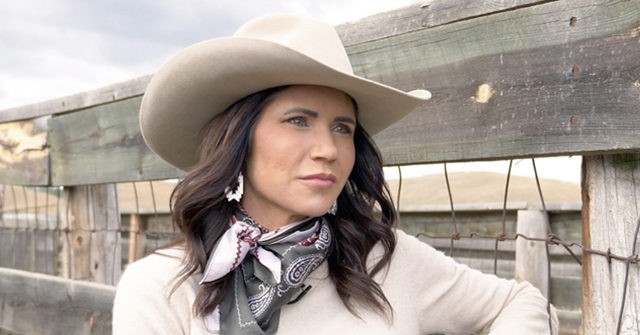 Kristi Noem (R-SD) told Breitbart News that her background farming and ranching informs her decision-making in politics, serving as a foundation for what she calls her “problem-solving, common-sense approach” to governing.

“This is a special place,” Noem said in an interview in Custer State Park after its annual Governor’s Buffalo Roundup.Noem had just finished riding in the annual roundup of about 1,400 buffalo—one of the last remaining herds in the United States, kept on the state park lands—where she and dozens of others on horseback and even more in pickup trucks gather the creatures from their natural grazing lands, round them up, and drive them to corrals once a year.

Noem herself has even bought some buffalo from the state in past years and currently keeps hers at her own ranch.

But the annual event—now that she’s the governor of South Dakota—allows her to showcase her ranching skills to fellow South Dakotans and tens of thousands of people who come from all over the world to watch the feat from the hills around the park.

Kristi Noem (R-SD) mounts her horse and gets ready to round up buffalo at the annual Governor’s Buffalo Roundup in Custer State Park in South Dakota on September 24, 2021.

Noem applies those life lessons to governing now as the chief executive of the state of South Dakota.

What put Noem and her state on the national political stage over the past couple years is how she has handled the coronavirus pandemic compared to some other governors—especially Democrats but even some Republicans.

At the end of the day, my number one job is I raised my hand and swore an oath to uphold the Constitution of the state of South Dakota and of the United States.”.

Kristi Noem delivers her first budget address to lawmakers at the state capitol in Pierre, SD, on January 23, 2019.

Even though Noem never locked down, there was an effort at the beginning of the pandemic—which was ultimately rejected by the state legislature—that her administration sought powers to give state health officials such powers to lock down.

Asked to explain why she thinks South Dakota’s response was better than say, Florida or Texas, Noem said “I believe we have to look at results.”.

President Donald Trump and Governor of South Dakota-elect Kristi Noem during a meeting with Governors elects in the Cabinet Room at the White House on December 13, 2018.

“I’m not here to judge any other state or any other leader other than I trusted my people,” Noem said.“We don’t have a policy in South Dakota and I’m not planning on bringing any kind of a restriction on private businesses,” Noem said.Asked hypothetically about if all of South Dakota’s major hospital systems—there are only a few in the state—mandate the vaccine, what a nurse with a medical or religious objection should do, Noem said there are independent other places a nurse could work.“We’ve still got some independent healthcare places and and jobs and careers and positions in the state as well,” Noem said.

Kristi Noem arrives at the Sturgis Buffalo Chip campground after riding in the Legends Ride for charity on August 9, 2021 near Sturgis, South Dakota.

Kristi Noemarrives at the Sturgis Buffalo Chip campground after riding in the Legends Ride for charity on a 2021 Indian Chief on August 9, 2021, near Sturgis, South Dakota

According to the Bureau of Labor Statistics (BLS), South Dakota’s unemployment rate is currently 2.9 percent—it has been consistently under 3 percent since the early spring of this year—and the state’s GDP outpaced Texas for the first time any state has in a long time recently, something Abbott even congratulated Noem for at a recent event

“In South Dakota today I have right about around a thousand people in the entire state that are on unemployment benefits right now,” Noem told Breitbart News

“When President Trump offered the elevated unemployment benefits to the country, South Dakota was the only state that said to the president, ‘Thank you for that flexibility, but we don’t need it because South Dakotans want to work.’ They did

Noem added that “usually it’s a little tough to beat Texas” on GDP, and that the Lone Star State clocked in earlier this year at 7.5 percent but South Dakota came in even better at 9.9 percent

Her state, she said, has “incredible growth here and I think that reflects how we were innovative here to help people be successful even in the midst of a pandemic.”

Noem said the surge of people moving to South Dakota from across the country does not concern her politically, noting that most of the folks coming share South Dakotan conservative values“I believe people are moving here because they want to be like us,” Noem said